Immediately following that disastrous fire, Archbishop Joseph McGucken gathered his consultors to begin the process of planning and constructing a new cathedral. The Archbishop commissioned three well known local architects for the project - Angus McSweeney, Paul A. Ryan and John Michael Lee - who began submitting preliminary sketches for the new cathedral which ranged from traditional Romanesque to California mission style. Plans soon took a dramatic turn as a result of a controversy ignited by an article written by architectural critic Allen Temko, who advocated a move beyond traditional architectural concepts to create a bold, new cathedral that would reflect San Francisco's status as a major international urban center. To build a cathedral which would reflect the soul of San Francisco, Archbishop McGucken added two internationally known architects to his team, Italian-born Pietro Belluschi, Dean of the School of Architecture of the Massachusetts Institute of Technology, who was placed in charge of designs, and Pier-Luigi Nervi, an engineering genius from Rome, who took over structural concerns.

As plans for the new cathedral progressed, Archbishop McGucken was participating in the proceedings of the Second Vatican Council in Rome. The Council provided another impetus to the call for innovative design. The design for the new cathedral had to reflect San Francisco's greatness, and also had to incorporate the new liturgical directives promulgated by the Council.

The contours of the new cathedral became clear through a series of press conferences held in 1964. The strikingly modern design which was presented (and with which we are familiar today) was met with high praise. Archbishop McGucken's architectural team had clearly designed a cathedral equal to San Francisco's greatness, and which, according to Mr. Nervi, was "The first cathedral truly of our time and in harmony with the liturgical reforms of the Council."

Ground was broken in August 1965 and Apostolic Delegate Luigi Raimondi blessed the cornerstone on December 13, 1967. The building was completed in 1970. The new cathedral was formally blessed on May 5,1971, again with Cardinal Raimondi presiding, and ceremonies completing its dedication took place on October 5, 1996 with Archbishop William J. Levada presiding. 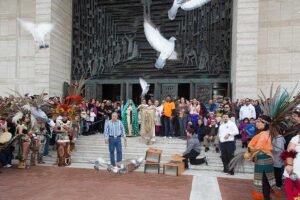 More than one hundred priests and half-a-dozen bishops have been ordained at St Mary's Cathedral. During his visit to San Francisco in 1987 Pope John Paul gathered for two meetings in the Cathedral space with people from around the country. One meeting was dedicated to men and women religious. During the second gathering the Holy Father met with lay leaders.

Spanish
Manage Cookie Consent
To provide the best experiences, we use technologies like cookies to store and/or access device information. Consenting to these technologies will allow us to process data such as browsing behavior or unique IDs on this site. Not consenting or withdrawing consent, may adversely affect certain features and functions.
Manage options Manage services Manage vendors Read more about these purposes
View preferences
{title} {title} {title}